The point of this post is to give an overview of git and introduce some basic terms that will be helpful when learning git properly, and using it in personal or shared projects. I’m going to try to keep it light, and, while I might brush over some details a bit quickly, I hopefully won’t leave you mystified. This is not meant to be a tutorial, and it will largely ignore several more complicated concepts, but it might prepare you to learn more about git. As much as possible, I will try to use layman’s terms if we have not yet introduced a technical term of vocabulary.

What is git and what problem does it solve?

Git is a version control system. That is to say, it’s a tool that helps keep track and manage changes to data over time. It solves the problem that most people working on a project longterm have encountered: how do we incrementally improve our work (create “versions”) without losing our previous efforts, and how do we collaborate and share these projects with others in a sensible manner?

I think that anyone that has worked on a computer long enough has ended up with a folder whose contents resemble at least a bit like this: 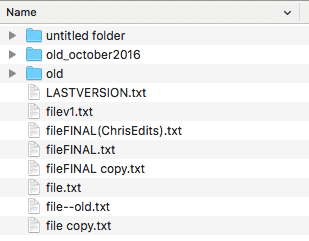 What git proposes is a solution in which, instead of having several competing, strangly named, versions of the same file visible at any given moment, you have access to the timeline (history) of the modifications to the file, presented as a series of incremental savepoints (commits)1.

We can visualize this history as a summarizing table of contents

If at some point, you wanted to check out what the file looked like before we deleted the minotaur, we could just check out the entry #5.

Git additionally provides us with ways of making it easy to share to a centralized repository where others can either pull down a copy of the project or contribute their own changes and push them up to the repository.

Finally, git has built-in functionalities to help with problems you might encounter: building isolated workspaces/versions of your project (branches), managing the timeline by removing or undoing a specific modifications/savepoints, or to resolve any problems (conflicts) that arise when two people try to edit the same part of the same file, to name a few. Git is a very rich organalizational tool, but it also has enough simple use-cases for a basic user to take advantage of it with just a little introduction.

Should I use it on my project? I’m working all alone, and I’m not sharing it.

Yes. A big, unsarcastic and unequivocal “yes”. Even if your project isn’t code. It’s a good habit to have, and one day, you might want to undo something or take a look at what you did along the way. Without a version control system, you’ll either be disorganized or working too hard on organizing your project’s history.

Here are some basic terms that you’ll encounter in learning git. I’d argue that these are the minimum needed to understand git enough to use git at a basic level.

A git repository is a collection of files, usually a directory which uses git to track its changes. Think of it as a capsule, a package, or an archive (like a .zip archive). A remote repository is the centralized repository which collaborators use as the basis for their work – i.e. the single source of truth. This is often a repository managed by a service like Github or bitbucket.

A commit is a single snapshot or savepoint of the data in a repository. Each row in the table above is a commit.

A commit notes the differences between this commit and the previous commit along with a message, a unique id/reference, the date, author, etc.

When working with a centralized repository (a remote), you will push your changes (commit(s)) to the remote. This will make your changes available to everyone else in the project to share their work on.

When working with a centralized repository (a remote), your local version of the repository is not necessarily be up-to-date with the remote version. In order get your local repository up to date, you’ll need to pull the changes down to your work, applying the remote commits to your repository.

An Example Without Code or Commands

A quick and basic example:

Two people are working on a project. Let’s call them Dave and Chris. Dave creates a repository on his laptop (local machine) and gets to work:

He’s pretty happy with his work, and he decides to make a savepoint, so he commits his work. He adds the message “Initiated the project. Created file.txt”

The next day, Dave looks at his work, and he decides that it can be improved.

He’s done with the changes, so he makes another commit with the message “Added punctuation.”

He wants to share the project so far with Chris, so he creates a centralized, remote repository on GitHub. The remote is currently empty. He pushes his two commits up to the remote. Now the GitHub repo (“repo” is short for “repository”) is up-to-date with Dave’s local repo.

Chris takes a look and he wants to make some changes to share with Dave. He creates an empty repo on his local machine, and pulls the content down from GitHub onto his machine. Now his work is up-to-date with GitHub and Dave.

He makes his changes:

He’s satisfied, so now, he makes a commit with the message “Updated message and added French version”. He wants to share his changes immediately, so he pushes his work up to GitHub.

Now Dave can pull down the repo from GitHub, and so on.

This post was not the most technical post, in fact, there’s not a single command! But, hopefully it provides a good overview of why you would want to use git and what that could look like.

The situation in our example is very basic, and it doesn’t cover a lot of issues that you might run into in real life2. But, rest assured that git is complex enough to handle pretty much any weird scenario you can throw at it.

In order to keep this post light (respecting both your time and mine), that’s going to be it for now. I hope to develop a few more posts in this series introducing additional concepts (in a similar manner), along with the actual terminal commands that you can use to manipulate a git repository3.